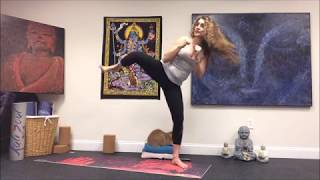 Tap into Your Fierce & Fearless 🔥🖐

Body Mudras to Shake Things Up in 2020 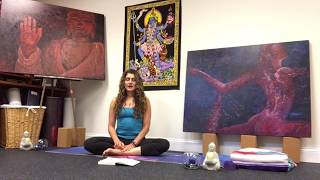 Kali is the Goddess of beginnings/endings, enlightenment, liberation. She’s fierce, she’s fearless. She gets down and dirty for sure- as she takes on and defeats the most powerful of demons. She’s also compassionate & loving; when you are ready to let go of attachment to the ego she will shower you with the love that you are. Kali points you towards those parts of yourself that you have rejected, feared or ignored, she inspires you to transform your identity, and transform it again, letting go of rigid ideas of who you and others are, stretching your emotional range, your mind and life itself in

Kali is the counterpart of Shiva the destroyer. They are the destroyers of unreality. The ego sees Mother Kali and trembles with fear because the ego sees in Her its own eventual demise. A person who is attached to his or her ego will not be receptive to Mother Kali and she will appear in a fearsome form. Someone engaging in a spiritual practice to remove the illusion of the ego sees Mother Kali as very sweet, affectionate, and overflowing with incomprehensible love for Her children. She is highly compassionate, providing liberation to Her children.

Kali wears a garland of skulls and a skirt of dismembered arms because the ego arises out of identification with the body. In truth we are beings of spirit and not flesh. So liberation can only proceed when our attachment to the body ends. The garland and skirt are trophies worn by Her to symbolize having liberated Her children from attachment to the limited body. She holds a sword and a freshly severed head dripping blood. As the story goes, this represents a great battle in which she destroyed the demon Raktabija. Her black skin represents the womb of the quantum un-manifest from which all of creation arises and into which all of creation will eventually dissolve. She is shown standing on a white-skinned Shiva, contrasting Her black or sometimes dark blue skin. He has a blissful detached look. Shiva represents pure formless awareness- being-consciousness-bliss- while She represents "form" eternally supported by the substratum of pure awareness.

Kali is the goddess of enlightenment or liberation; endings and beginnings. The old must be released so that the new can enter.

In pointing you towards those parts of yourself that you have rejected, feared or ignored, she inspires you to transform your identity, and transform it again, letting go of rigid ideas of who you and others are, stretching your emotional range, your mind and life itself in delicious and liberating ways.

*** TRY THIS EXERCISE (from Sally Kempton) to connect with your inner Kali & work through blocks (This is a good one; I’ve done it myself) Dialoguing with Kali Materials: To do this process, you’ll need pen and paper–enough paper so that you can continue writing as long as necessary. I also recommend having an image of Kali–a picture or computer image–that you can use to summon the Kali energy.

1) Spend a few moments in contemplation, recalling the symbology of Kali. Because the psyche responds to symbols and images far more readily than to words, I often find that to invoke archetypal imagery can open up realms of the personal unconscious that are otherwise unavailable. Find a picture of Kali, preferably a detailed and beautiful one. Look at the image, noting her beautiful face, her wild hair, her upraised sword, the way she is dancing. Look at the necklace of skulls. Notice the emotions that come up as you look at her. Notice especially such charged emotions as fear, excitement, aversion, confusion, or attraction.

2) With a notebook and pen close by, close your eyes and summon Kali inwardly. Ask that the Kali energy in you be present. Ask, “Let me speak to Kali.”

3) With your dominant hand, write,

Who are you, or “Tell me about yourself.”

Then, take the pen in your left hand, and write an answer.

6) With the non dominant hand, write your answer.

7) Continue the dialogue as long as it has energy. You can always come back to it later.

9) Thank your inner Kali. Place the picture or image of Kali somewhere where you can see it.

10) Take an action that feels connected to the Kali energy you’ve accessed. Kali-like activities might include a physical expression, such as wild dancing or kicking, a verbal expression, speaking a truth you have been afraid to voice, asserting a preference, doing something you never did before.

11) Note any dreams, insights, or shifts that arise in the next few days.

12) Once you feel that the process is more or less complete, you may burn the image of Kali, or offer it into a body of flowing water. Do this with the feeling that you are offering the energy of the goddess back into the universe, and thus taking the insights you’ve received deeply into your own being.